Let’s Take a Walk
Interactive Performance/Installation
Let’s Take a Walk uses the phenomenon of Twitter so that people all over the world can join in a “group walk.”  On scheduled times, participants (located in various locations throughout the world) would receive “tweet” messages, providing a series  of walking/viewing directions to follow my path through a specific site. Requesting that they film their journey, the various footage are then  assembled into a video installation showing the experience of our group walking in different places but moving synchronized through the same footprints... recreating the blueprint of the landmark/institution I am walking on in that particular day.
So far, the project has included journeys I’ve guided in Strawberry Field, through the crowded streets of the New York City Marathon, Union Sq market during the holidays’ season and on Martin Luther King weekend I followed the route of the 1967 Peace March from Central Park to the United Nation. Walk #5 was conducted from Stowe VT and to mark the opening of the  exhibition of Marina Abramović The artist is present  Let's take a walk #6 took place around and in MOMA.
Exploring ideas of isolation and community,(calling to mind both
guided tour groups and flaneur wanderings), I’m also interested in conducting the walks as performances within the museum and other art/cultural public spaces to create a new context.
I hope that you will join me for the next walk.
Please contact me via mariechristine@mindspring.com    and follow me on Twitter mcayer 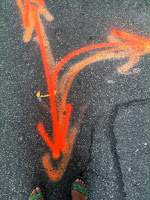 Posted by Marie Christine Katz at 9:30 AM No comments: